Capon Valley 50k is in the Books!

Capon Valley 50k is one of the nicest, funnest, chillest, toughest, hilliest most scenic races ever and I loved going back. This was my second time out there and I plan to go back each year despite the fact that every time I run an ultra, I say, never again. But I had a SUCH great time. What a party! It was also extra excellent to have Andy out there. It made us bond and shit. We packed up the car as if we were staying for days but all I really needed was proper hydration and a few emergency type supplies. 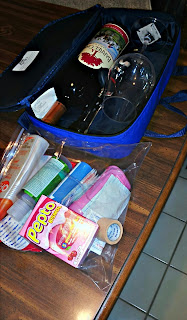 We camped out the night before and saw Jim Nagle, Mike Bailey, Christine Bone and a bunch of other friends including the gang from the VHTRC. Andy pitched a tent (hahaha I know so bad) then we sat around and drank Andy's overly expensive snobby IPA's with Nagle and Bailey. Had a bit of a hangover the next morning but whatever, it was a beautiful starry night. 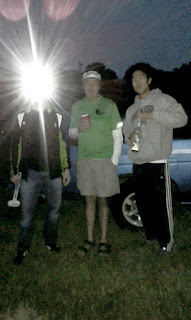 I froze to death that night but having body heat next to me helped. No we didn't get busy. Not that it's anyone's business..heh..Ahem that's a whole different blog. haha but I digress. The next morning, we woke up and saw Nagle. He camped right next to us.A bit later, we saw Paul as I struggled to find my most basic stuff like gels, watch, S caps, and trying to get my drop bag ready except I couldn't find anything and was starting to get frantic. Nagle, Andy, Paul..they were all pretty chill that morning. 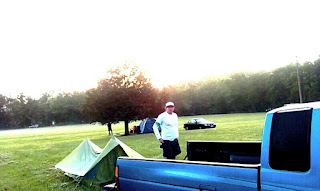 I guess I got caught up in the beauty of that morning. I mean, THIS is what humans were meant to do! Wake up to a perfectly gorgeous morning and run with friends through the woods! 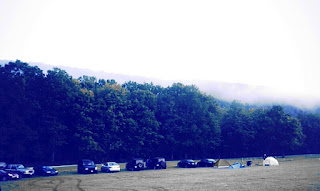 Race started and I never saw Andy or Paul from the very first step for the entire race. I chit chatted with my friends and felt fabulous going up and down 2000 feet of hills (9000 feet of elevation change total) and jumping through 12+ streams.. My feet were wet right away for the entire race but amazingly, no blisters. I forgot body glide but amazingly, no chafing either. yay. I was having a blast. 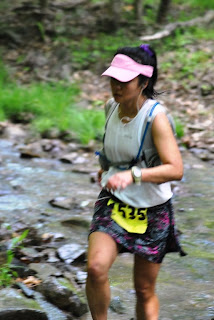 Mile 11-18 was an up and down climb reaching to 2000 feet with 16-18 being just straight up to the point your feet were completely bent towards your shin and you had to grab onto trees to keep from falling. We get to the top and see this awesome view. We run down rocks with our quads just pounding away. Ouch. The rocks gave me a few bruises on the bottom of my feet. Ow ow ow. We had a few more hills and streams for the rest of the race. aack. But can I say that at every single aid station, the snacks and drinks were plentiful, the volunteers super helpful as they grabbed my hydration pack and refilled it for me and told me to go eat something. I thanked them and then they thanked me! Really lovely down to earth awesome people. The people are SO NICE. Not fake nice like some of the assholes in the city but for real nice.

Around mile 15, Christine, a friend who trained me through my first ultra, passed me making fun of me for being a  wimpy road runner. She always likes to bust my chops. Then around 20 or so, Jim Nagle passed me saying he's been trying to catch me for 18 miles. I did try to take it easy in the beginning I did! I walked all the hills. But I guess I petered out by then because Jim easily passed me as he was nice and warmed up now. I was pretty much done and done by then. Clearly, I've not trained beyond 15 miles for a very long time. Mile 26 I saw Farouk, a PT I had gone to when I tore my calf running on the AT last year passed me after he stopped right in front of me to pee. There is no modesty in these trail runs. When I ran with him at Stonemill 50 miler, he was literally peeing and running at the same time. I was incredulous. He is also in his 60's and runs 100 milers. Total stud.

After mile 27 or so, it was a death march. The sun just came out and it got REALLY HOT. Like Brian K, I wilt in the heat and I just started losing it. My quads were possessed and they visibly cramped up producing these weird looking painful waves! I had to stop several times to massage them out! So weird to see your leg just move around uncontrollably like that on it's own! I was thinking at that time, I don't know how I'm going to keep going. I have no other way to get back except on my feet. I'm in the middle of frickin nowhere. I'm gonna die. OMG I'm gonna die out here. And then Luke will be motherless and it'll be all my fault for doing something so stupid..wait wait, pull it together Janet, just keep going. Shut up just keep going. See, I was losing my ever lovin mind. I took a whole bunch of S caps and Pepto pills - oh yea the stomach was starting to act up. Lets not go there.  And I kept going. Just keep moving, just keep moving just keep moving.

Around mile 28, I took a wrong turn and several people followed me down a big hill. They wanted to kill me when I said, oops, wrong way! Back up the hill we go as if we didn't run enough hills already.  I saw one of the guys later and he still looked mad. Why do people follow an Asian woman as if we ever know where we're going?

When we hit the last aid station and they said 3.5 miles to go, I don't think I was ever so happy in my life. There was someone with a water hose and I just stood there like I was taking a shower. That really cooled me off. For a while anyway. I started to pick up the pace not because I was feeling good but because I just wanted to get this thing over with already. I approached the finish line and saw one of my favorite ultra runners, Gary K.. He's this 68 yr old happy guy who runs an ultra a month and ran the MMT 100 miler last weekend. He gave me a fist pump (and later, a coke and rum - good post long run drink as it turns out..btw Mimosas are good too :) So great to see him cheer people on. Then I saw Andy (having had lunch and a couple of beers already) was taking video of me. I gave an air kiss to the camera but I was literally in tears I felt soooo bad. I was so hot I felt like I would spontaneously combust into flames. Yes, I do think spontaneous human combustion is possible.

I crossed the finish line and burst into tears. Not sure why - I guess I was so happy to be done and so miserable at the same time. I begged Andy please get me some ice I'm gonna die! The I'm gonna die mantra was a recurring phrase in my head that day. I eventually stopped having my girly hissy fit.  (All the while Andy is patiently sitting there listening to all my whining). I demanded he give me his flip flops so I can get out of my nasty running shoes. Then I hobbled over to my car and got me a tasty IPA. I changed into something more comfy then hung out with Andy and some folks from VHTRC. Not sure what happened to Paul - he finished so early I guess he took off.

Post race food was amazing. Everyone got like a giant half of an entire chicken. There was a ton of food and drink and desert. No prizes as far as I could tell. All the proceeds go to the fire department and the food bank. I love that aspect of it. Giving back to the community while running an amazing race. The male winner is a sub 2:30 marathoner and he just showed up, ran, hung out with us just like he was one of us mortals. Some amazing runners ran this race in the most humble way encouraging even the slowest among us. Such sportsmanship! This, is what running is all about. 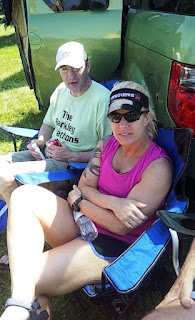 After I stuffed my face, Gary gave me some whiskey or scotch or whatever it is he always gives me before/during/after an ultra. I forgot (almost) all about the pain. Oh yea..IPAs, gluttony and scotch. Maybe not the best idea as I was forced to chew Pepto tablets like candy for the rest of the day. But hey, can't say no to this guy. The grand daddy of the ultra runners around here. He's so funny and cool. 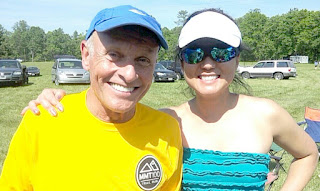 We started to pack it in to go. But I was missing my drop bags that I so carefully packed and never used. Typical. We waited for a while to get those back then we took off. I made Andy drive. I mean, he was totally fine. Stinker.

Paul H. and Andy totally crushed this race. Congrats to Paul who ran a 4:59 in his very first ultra! Andy ran a comfortable 5:36 in preparation for his A race the 100 miler in July (is he crazy? in July?? you can do that if you're indestructible) and I ran an "easy" (not really easy) training run of 6:42 to jump start the summer training season. (hurray! I wasn't last!). Bailey (4:52 craziness), Nagle (6:14) and Bone (6:17) just ran this like it was a walk in the park. I don't think they broke a sweat. They got bigger fish to fry later in the year.

We saw old friends and ran through the most beautiful trails of WV. I haven't run all week. Andy ran every day this week. How is that possible? I feel like such a slacker but I couldn't walk down the stairs for 3 days. Last time I felt like this was my first Boston when I was untrained for those hills so many years ago. I've been exhausted all week.

This was a painful crash course in training catch up. Reminded me of my days in college when I would study for finals the night before the test and I hadn't cracked the textbook open all semester. However, I'm ready to come back. I got my first hot long run under my belt to kick off the summer training season. I had to jump start it somehow didn't I?  Now the trick is to stay healthy and detox my diet. Must reduce Fried Potato Products and Ice Cream. And wine. And IPA's. That'll be harder than any race I've ever done. Zero will power over here.

So who's running tomorrow? I'm back to hitting the pavement.  I made myself a training plan and have some sharpening races in mind in preparation for Steamtown, Richmond and Houston. I hope to be pounding the pavement with the Morningstars as much as possible. But at the end of the day, I will always be called back to the zen trails to run amuck through the woods. Also, the whole forest is your bathroom so that's kinda nice. 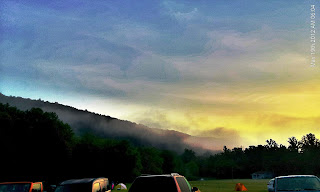